How to Bring Women Back to the Workforce in the Wake of COVID-19.

It seems unfathomable, but in a way, that's where we are, largely because the COVID-19 pandemic disproportionately affected women in a major way.

Think about all the gains women in tech made in the last 30-plus years. Now imagine them all being erased. It seems unfathomable, but in a way, that's where we are, largely because the COVID-19 pandemic disproportionately affected women in a major way, setting back the amount of women in the workforce to levels not seen since 1988.

So what can employers do to repair the damage, and what should women look for in an employer to start coming back? We'll examine the many ways that COVID-19 negatively impacted women in the workforce and propose solutions to address them.

Job losses were felt far and wide during the height of the pandemic, with the unemployment rate peaking at 14.8 percent in April 2020 — an astronomical figure not seen since the 1940s. Since then, the labor market has largely recovered, but the effects haven't been felt evenly across the board.

Women, who had already experienced disproportionate job losses during the pandemic, have still yet to recoup 1.4 million of the jobs they lost, while men have recouped all of theirs.

Analysts have zeroed in on the factors most believe to be behind this disparity. For one, nearly half of all working women (46%) work in low-paying jobs — jobs that often require in-person work. Without the ability to go remote, many women were simply let go, giving them a significant disadvantage right from the outset.

But workplaces weren't the only operations shuttering their doors. School and daycare closures required more women, historically the ones most responsible for child care, to stay home or reduce their hours. Between February and August 2020, for example, mothers of children under 12 years old lost 2.2 million jobs compared to 870,000 jobs lost among fathers. As virus variants emerged, the threat of intermittent school and daycare closes placed many women in a difficult spot when considering when to return to work, with many deciding to err on the side of caution and postpone their return to the workforce.

For women in tech, who were employed in positions that could be accomplished remotely, other factors must surely be at work. Despite the relative security of their positions, women in tech are still 1.6 times more likely to be laid off than men. Part of this could be due to the fact that women occupy fewer senior-level positions within tech companies, putting them at a disadvantage when it comes to evaluating tenure for layoffs.

But the factors affecting women in other sectors are at play here as well, though not as directly. For example, even without losing their jobs:

The numbers don't lie: The pandemic has disproportionately affected women. However, there were some positive gains made in other areas to which we can all look with optimism as we work on rebalancing the workforce for the post-pandemic world.

Despite being impacted greatly by the raw unemployment numbers, women in tech with leadership positions were actually more likely than men to thrive. More women than men said their managerial duties became easier to accomplish in a remote work environment. In fact, compared to men:

These findings aren't just theoretical, either. Fifteen percent of women with mid-level leadership positions reported receiving a promotion during the pandemic (as opposed to just 10 percent of men), indicating that remote-work boost in performance translated to tangible results — and didn't go unnoticed by higher-level decision-makers.

Welcoming women back to the workforce

While it's encouraging to see that our new ways of working are ordered in a way that empowers women to do their best work, the fact remains that there are still not enough of them employed to reap the benefits.

In order to create the right kinds of working environments that can win women back, employers should focus on tailoring their perks and benefits around the biggest barriers preventing their return. Providing onsite childcare, or a childcare stipend can go a long way to freeing women to focus fully on work. Additional perks centered on flexibility are also key. Continuing to provide remote and hybrid working models, which give women the freedom to work according to their own schedules as needed, provides important peace of mind.

Tech itself, however, presents its own set of industry-specific barriers to overcome. In such a fast-moving space, even just two years away from work could result in an under-developed set of skills. To fix this, employers should think seriously about designing comprehensive "returnship" programs. Companies like Johnson and Johnson have provided a structured (and paid) returnship program for those returning to the workforce after an extended leave. The program provides a great template for other employers to follow, incorporating a mix of onboarding and new-skill training paired with more individualized guidance from mentors and other program alumni.

Reliving the workforce levels of 1988 today sounds imposing, but the foundation for a rebound is strong — making a V-shaped recovery back to pre-pandemic levels possible with the right actions. Start making these changes today and supporting them with ongoing commitments, and we'll be back to the future in no time.

Breaking Bias: What It Looks Like To Be a Woman in Tech Today.

What does it look like to be a woman in tech today? See which problems still persist as well as the biggest benefits to pursuing a career in the...

Do you need help convincing your manager to send you to a Women Impact Tech Accelerate Conference? 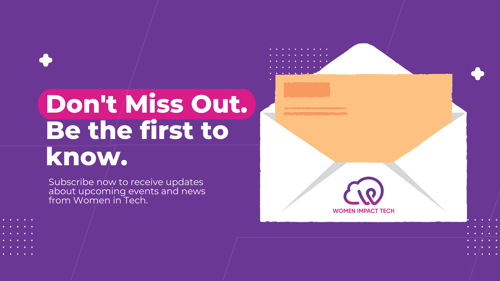